The rains in Africa… 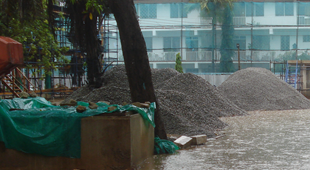 The International School of Tanganyika (IST) is an independent, private, not-for-profit day school located on two campuses in Dar es Salaam, Tanzania. IST offers rigorous academic programmes coupled with a wide range of extra-curricular activities serving students from age 3 to Grade 12. Founded in 1963 by a group of parents led by Dr. Michael Latham (Chair) and Sir Andy Chande (Treasurer and Secretary). The name, the International School of Tanganyika, reflects the fact that it was founded before the union of Tanganyika and Zanzibar, which became Tanzania.

The school lies on the Msasani peninsula of Dar es Salaam surrounded by the Indian Ocean and Msasani Bay and has over 1000 pupils and 128 teachers representing 60 nationalities. 95% of students matriculate to a 4-year college or university. Recent graduates have gone on to leading international universities such as Stanford, Leeds, Warwick, Columbia, Princeton and MIT.

The city of Dar es Salaam lies on the west coast of Tanzania on the Indian Ocean and is susceptible to flooding from the tropical storms that affect this region every year. At the beginning of 2015, Tanzania’s parliament adopted a new law to help authorities cope with the emergencies of both natural and man-made disasters. The Disaster Management Agency (DMA) oversees efforts to prevent damage and deal with the impacts of floods, drought, hail, storms and hunger, as well as managing the stocking of supplies to aid effective response.

During the floods of 2011, floodwater rose to 60cm in the main Administration building, it also affected the PE Hall and 14 faculty apartments located on the ground floor. Six of the staff members had extensive damage to their homes and another 50 had some degree of damage due to the floods. Flooding in subsequent years has been less severe but still represents both a safety and a financial risk to the school. As a result, Martin Shaw, ISTs Construction Project manager, has been charged with designing and implementing a flood defence strategy to mitigate this risk for the future.

After researching the subject, Martin chose Floodgate to supply barriers and non-return valves. “Floodgate’s unique design of an expandable gate suited our requirements perfectly, we only needed two different sizes to cope with all our needs. The robust steel frame coupled with replaceable neoprene jackets means we can look forward to a long serviceable life from our investment. As a not-for-profit organisation, every penny counts and whilst we can’t afford to cut corners, we also need to ensure that we maximise the value of any investment.”

For the faculty members of staff whose apartments were flooded and had their belongings destroyed, installing non-return values in the drains and floodgates in the doorways helps to protect their homes, giving them a safe place to live and making the International School of Tanganyika a better and safer place to teach.