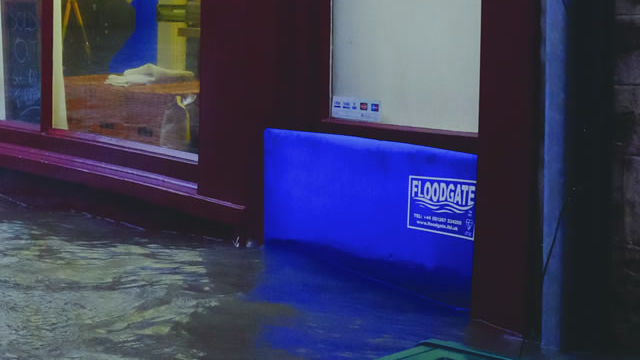 We’re often asked to justify why our Floodgates are “only” 68cm high and can’t we make taller barriers to cope with deeper floodwater. We also get asked whether it would be better to fit a flood-proof door, so we will attempt to address both these issues here.

Our Floodgates are designed to protect from flooding up to 60cm deep with an additional 8cm to allow for small waves, typically caused by wind and passing vehicles. The reason for selecting 60cm as the “magic number” was from research into the strength of conventional brick built cavity walls.

Planning Policy Statement 25 Practise Guide written by the department for communities and local government, highlights the need to allow flood water above 60cm to travel through a property as, the weight of the water (hydrostatic pressure) on the outside of the wall risks permanently damaging the wall. If the flood level exceeds this limit it is necessary to allow the water to reach the inside of the wall to equalise the pressure. This should be done gradually to avoid what is known as catastrophic failure – completely removing the existing flood protection at this point would likely cause significant damage as the water rushes into the property, through the doorways. Allowing the Floodgate to “overtop” means that there will be a gradual influx of water until the levels equalise on both sides of the barrier.

What do you do when your flood door breaks?

In the aftermath of Storm Desmond in 2015, over 60 people in Cumbria had flood doors installed which have subsequently failed to perform as intended – It is important to note that not all doors failed but, for the owners of those that did, that is not much consolation. See this item from BBC News for more information:  https://www.bbc.co.uk/news/uk-england-cumbria-47203766

Our offices will be closed Monday 20th December to Tuesday 4th January.