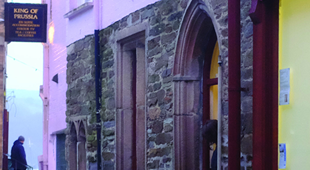 St Austell Brewery is an independent family owned brewery founded in 1851 and still growing. As well as the core business of brewing fine ale – the business owns and operates a network of 170 pubs, inns and hotels stretching from the Scilly Isles to Bristol. Many of these properties are listed – putting an additional burden of responsibility on the business to maintain and protect the fabric of the buildings as well as to protect the safety of the managers, employees and customers and the viability of the businesses themselves.

Many of the brewery’s properties are situated close to rivers and, over the years, the risk of flooding has been a constant. The sequence of Atlantic storms that rolled in one after the other at the beginning of 2014 took their toll on the brewery’s territory with exceptional coastal flooding along the southern coastline of Devon and Cornwall, flooding of the Somerset Levels and many rivers overflowing their banks.

In Fowey, the area of the Town Quay, Webb Street and Fore Street found itself under about a foot of seawater on several occasions as the storm surges amplified the spring tides and the sea just kept rising. Two brewery properties, The King of Prussia and The Lugger Hotel, were directly affected. Jo Bond, Property Office Manager for St Austell Brewery, said, “The King of Prussia and The Lugger Hotel were the first properties that we provided with Floodgates. As historic buildings, we are strictly limited in what we can do in terms of modifications to the fabric of the buildings and Floodgates have proved to be the ideal solution, as they required little or no modifications around the openings that we were looking to protect.”

She went on to say, “Subsequently we have purchased more gates and non-return valves to protect other specific properties as well as having some gates in a range of sizes here at the brewery that we can deploy at short notice to any property that appears to be at risk according to the prevailing weather forecasts. This is practical as the Floodgates, uniquely, expand to fit the doorway so we only need to keep a few different sizes.”

There’s a limit to how much you can hold back nature and St Austell Brewery have had to accept that some properties will flood, whatever precautions they take – in those properties they combine sensible precautions together with resilience measures such as replacing wooden floors with slate tiles so that if the property is flooded, it can be cleaned up afterwards and be back in business as quickly as possible.